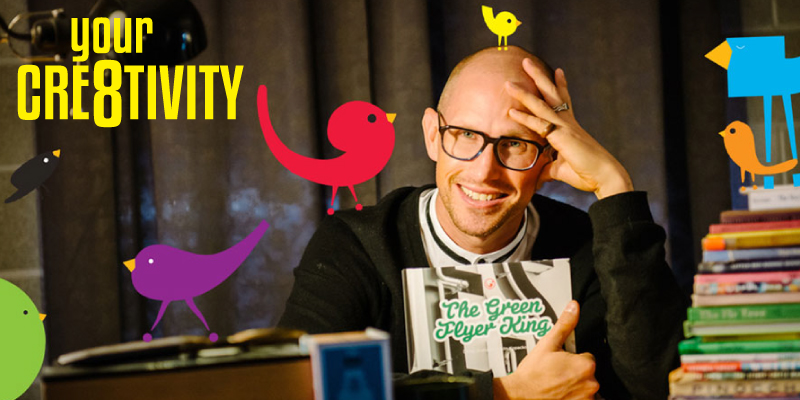 When I first became aware of DALLAS GRAHAM, it was during a Creative Mornings session at our local Salt Lake City chapter. Dallas was providing a talk on the topic of Collaboration. He shared his story about the Red Fred Project and I have felt connected to the cause ever since. Dallas shared some incredible answers to our questions that we have forwarded to him.

1. Describe What You Do.

I run a non-profit, independent publishing company. We help children living in extraordinary circumstances (rare diseases, critical conditions, life-limiting illnesses) bring stories to life by asking the question: If you could write a story, for the entire world to read, what would it be about?
The Red Fred Project turns three this 13 October! “Lucky” doesn’t go the distance of what I feel when I realize, each day, the work I’m surrounded in. This intersection of publishing and working with these terrific kids is really making new roads of understanding and curiosity and value in my life.

My every day is working to make sure the Red Fred Project reaches its goal: 50 children, 50 books, 50 states. Once in a while, if we’re between kiddos, I may take on a branding project or a photography project, too. Lastly, during the midnight hours, I’m writing my second YA novel about the secretive origins of a boy-thief (Nikolas) who will eventually become known as Santa Claus.

2. How Did You Get To Where You Are Today?

The Red Fred Project exists because of the belief and assistance of OTHERS. And I mean that in a very literal way. The project was initiated by a Kickstarter® campaign in 2013. Over 1,400 people from around the world pledged in order to make our goal a reality in 30 days. So, you see, I’m doing what I’m doing today because a lot of people believe in the to-be-discovered stories of these kids. I can never forget that.
I’d also say I’m where I’m at today because I’m lucky (which is really years and years or trying different things out and landing somewhere close to my heart’s compass of True North). I’m where I’m at today because I saw an opportunity to connect professional-level creative problem solving with a demographic that is limited, professionally—namely children with critical illnesses.
Lastly, I’m where I’m at today because I followed my gut, took a risk, and jumped into an ocean of unknown opportunity because not doing so would have been a self-deception to my soul.

3. What Type Of Conditions Are You The Most Creative For You?

I love this question! A couple of things come to mind. One condition is time of day. I’m a morning-lover. I absolutely LOVE mornings. I love the sun coming up. I love to move my body and break a sweat. I love to take time to make a delicious breakfast with healthy food. And I love giving myself the time to not be rushed. A great morning sets me up, like clockwork.

Another conditions I’ve tried to remain true to is listening to the Muse when she speaks to me. That state—or condition—when I have quickened thoughts, filled with potential energy, is a very important thing to recognize. That’s what I call “hearing the Muse.” I’ve made the mistake a number of times of putting something off because it wasn’t convenient and noticed the ideas and clarity have slipped away. Now, I’m more in a habit of recognizing when she is there and then I make sure to listen to her ideas. She’s usually right!

4. Who Has Inspired You Most? Why?

John Milton (Wikipedia), the English poet and writer, has been a source of inspiration for me for a very long time. I studied his life and works while I was doing my undergraduate work. I couldn’t get enough of his words! His epic poem, Paradise Lost, is my favorite book and to this day, I can pull it off the shelf, read a passage, and be astounded by the clarity of his thoughts and the power of his written voice. Why does his work inspire me? He took one of the most well-known, cultural mythologies (that of the explosion of Adam & Eve from the Garden of Eden) and turned it on its head in order to explore the characters surrounded that primordial drama.

Taking a long hike and getting into the mountains is another source of inspiration. I can’t seem to get enough of that kinda and luckily, living in Salt Lake, I have plenty of opportunity for that.

5. What Inspired You To Do The Red Fred Project?

The passing of a 10-year old boy named Mitchell. I became aware of “Mitchell’s Journey” via Facebook and was quickly moved by what I saw. Mitchell was living with a very rare disease (Duchenne muscular dystrophy) when I came to know about him. His parents had been sharing his journey with thousands. One night, when trying to think of how I could possibly do anything for the family, Red Fred flew down to my shoulder and said, “We should make a book with him.”
Although Mitchell’s parents said “yes” when I asked them if they would be interested in me making a book with their son, scheduling to meet up was dictated by his continual declining health. You see, by the time I got to know about him, his heart was starting to fail.
His reality drove my desire to create this book MUCH sooner than later. Unfortunately, Mitchell’s heart couldn’t do much more and on 4 March 2013, his presence left this planet and a thunderbolt realization struck my core: There are thousands of children limited on how or if they’ll be able to make a book at some point in their lives. We need to make books with them. Now.

6. Share Some Experiences That You’ve Had During The Creative Sessions With The Kids.

Working with each of the Creatives has been a wonderful experience. Each one is different from the other and yet, they all have the similarity that I’m after: they are kids and they think like kids. I remember working with Delaney, our Creative from Colorado. When we were looking at the swatch book, trying to find just the right color for Keeana (her comma bird), I asked her how to describe the pink we ended up using. “It’s like the color of the inside of a strawberry.”

Zeke, our most recent Creative, expressed some interesting choice for names when I visited him in Maryland a few weeks ago. You see, each Creative gets to give their Trooper a name. The last name of the bird is taken care of — it’s the typeface the comma-body of the Trooper comes from. Naming an object or a pet or an imaginary friend is a curious thing when you think about it. A lot of times, the names we choose to name a thing have meaning from somewhere else. And then, there are other times, that the name is simply something original and meaningful only to us. While I was working with Zeke on the name of his Trooper, he came up with a few options: “Even… Josh… Leonard… and Captain.” I smiled and tried holding in my delight. “Captain?” I asked, not wanting to steer him away from that. “You know that’s a title, right?” Zeke nodded. “But can he be named that, too?” This moment—the wonder if it’s okay to make their imagination real—is a very special moment for me. In fact, the entire process of the book-making is filled with these moments. I nodded, “Yes, Zeke. Captain would be an incredible name for this bird!” Zeke nodded again and then decided he’d have a middle initial too, that would be talked about in the book.

7. Recently, One Of The Books Became A Play. Tell Us About That Experience.

Once in a great while, we have the opportunity to see something quite extraordinary. Something unlike anything else we’ve ever seen. When I think back to March 2016 and the 31 performances that were performed in that little church at Salt Lake Acting Co., the very deepest parts of my soul are filled with joy. Why? A terrific, creative community came together to make a mind-blowing performance of a story created by a boy living with brittle bones disease. What I was thrilled to see was the hand-holding of the creative team, working tirelessly to “get it right” as they rehearsed week after week. Of course, seeing Nathan Glad’s face, as well as his family’s, was the highlight of the entire experience. Other mighty things happened, too: four additional books were funded by patrons coming to see the play! Four books! That’s an amazing thing and it speaks of the potency of the story and the brilliance of the creative team that made that happen. I will always ALWAYS hold Salt Lake Acting Co. and Flying Bobcat Theatrical Laboratory in a very special place in my heart because they were the ones that made that production LIVE.

8. What Is Your Favorite Bird? Why?

That’s like asking who’s my favorite child. However, the Jolly Troop would concur with me if I said Algernon. Algernon is the chartreuse, plump, little-beaked bird that the entire Troop loves unabashedly. He’s the listener of the group. He doesn’t speak to get attention. Instead, he listens and thinks. He likes to eat anything green (which means green socks aren’t off the table!) and loves to camp. Even some of the stiffest Troopers, like Black Jack, aren’t bashful about snuggling up to Algernon. And that’s why there is a saying known among the Jolly Troop and kind of out in our world, too. It’s simply this: “Everyone loves Algernon.”
Previous PostPodcast 007: “2016 Salt Lake Comic Con”
Next PostTED Talk: “Jenna Schilstra”